BRITISH DESIGN: FROM WILLIAM MORRIS TO THE DIGITAL REVOLUTION

present an exhibition:
BRITISH DESIGN: FROM WILLIAM MORRIS TO THE DIGITAL REVOLUTION

The exhibition “British Design: from William Morris to the Digital Revolution” is a participant of Russian-British 2014 Bilateral Year and will take place in the Pushkin State Museum of Fine Arts. Intimate yet fundamental, this exhibition is a dialogue between design art of the XIX and XXI centuries. The exhibition will present 12 masterpieces by famous artists and designers of the XIX century from collection of Victoria and Albert Museum in London and 20 works of contemporary British designers.

By rethinking relevant objectives of the time every epoch creates it´s own aesthetics influenced by people’s cosmovision, their creative thinking development as well as technical progress.

Design originated in Great Britain where Industrial Revolution had started. During that period there develops mass production substituting a craftsman with a machine. This supersedure was followed by the reaction of establishing the Arts and Crafts movement that largely defined development of design in the beginning of the XX century.

William Morris, the leader and ideologist of the movement, being inspired by works of a writer and an art theorist John Ruskin stood for conservation of long-established national traditions of applied and decorative arts. Though Morris looked up to a medieval craftsman producing every object manually, his aesthetics wasn´t simply a copy of the cultural heritage of the past.  His art system was based on creative synthesis and reinvention of English Gothic and nature.

William Morris´s contemporary Christopher Dresser was the first independent and commercially successful product designer. Dresser has been searching for new visual forms – aesthetically attractive yet possible to be produced without using ambitious manufacturing technologies. He created minimalistic dinnerware and household goods based on synthetic geometry. The formation of this approach, which was way ahead of his time, was a result of his interest in botanics and traditional Japanese arts. Dresser didn´t try to use Japanese motives directly as well as he didn´t try to copy them – he reinvented them creating his own aesthetics.

Throughout the XIX century there have existed two approaches to design: one was based on the idea of synthesis of arts (William Morris), another was rational (Christopher Dresser).

In the XX century digital technologies have superseded analogue and mechanical ones. By the beginning of 2000s computer modelling, 3D printing and laser cutting have already been used for producing not only individual components but also finished manufactures. This process was named “Digital revolution” or “New industrial revolution”.

The exhibition is organized on the principle of a dialogue between objects of XIX and XX centuries. Furnishing fabrics by William Morris are placed side by side with a video projection “Look at your walls” by Christopher Pearson(2006). Pearson has taken as a basis Morris´s famous pattern “Willow boughs” (1887) and used modern technologies to create “wallpaper” with a dynamic, changing pattern: flower-buds are blossoming, boughs are growing, leaves are falling.

Two pairs of vases “Crevasse”(2008) by an architect star Zaha Hadid are made from a solid metal block and look utterly abstract. Metal tableware (1878) by Christopher Dresser is not related to its organic form as well.

An armchair created by a Scottish architect Charles Rennie Mackintosh in 1917 has an exceptionally laconic geometrical silhouette. An “Impression” chair (2002) by Julian Mayor is created from the map of a person’s seat and designed in minimalistic aesthetics as well.

In the beginning of the XX century painters and composers were looking for a way to visualise music. British multimedia artist Davide Quayola has incarnated their ideas in his audiovisual installation “Ravel Landscapes” (2014) where the sounds of Maurice Ravel´s music transform into images on the screen starting to resemble moving natural landscapes.

The exhibition “British Design: from William Morris to the Digital Revolution” will let you make short excursus to the past and future of British design: from classics of the XIX century to the main tendencies of the present.

Education program organised as part of the exhibition will star leading British designers and art historians. 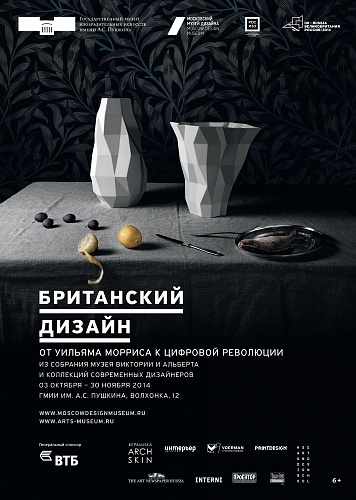 Exposure with the support