INTO THE UNKNOWN: A JOURNEY THROUGH SCIENCE FICTION

The first large-scale project dedicated to the genre of science fiction. For two years an international team brought together by the Barbican Centre was selecting the key science fiction works. As a result, the project has a really broad geography embracing not only Europe, the United States and Russia, but also Arab countries, Asia and Africa. The exhibition features original book editions, illustrations for science fiction works, comics and graphic novels, fragments of movies and video games, posters, sketches of scenes and costumes of characters, as well as a series of projects executed by contemporary artists and designers.

The contribution of Russian and Soviet science fiction to the world culture and design is represented by works from the extensive graphic collection of Moscow Design Museum. These are popular science magazines such as "Around the World" and "Technology for the Youth", futuristic advertising cards of Einem chocolate firm, souvenir cards and books illustrating the main milestones in the development of Russian science fiction. The Russian content was prepared by Alyona Sokolnikova, a Design historian and curator of Moscow Design Museum’s exhibitions. 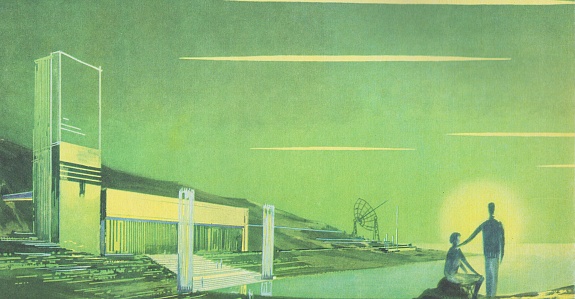