DESIGN SYSTEM IN THE USSR


Moscow Design Museum is opening the first ever exhibition which represents the state design system that existed in the Soviet Union in the 1960-1980’s. The project is a result of the research conducted by Moscow Design Museum based on studying the archives and interviewing Soviet designers. The exhibition tells about the main organizations working in the field of design and technical aesthetics, their interaction and role in the development of industrial production in our country.

The Soviet design started to develop on the second half of the twentieth century. On April 28, 1962 the Council of Ministers of the Soviet Union issued a decree "on improving the quality of goods in the fields of mechanical engineering and light industry by implementing design methods". This can be considered as an official date of the design system creation.

In the early 1960s, a network of research institutes was established across the country. Each of them was subordinate to a certain ministry and was responsible for the development and implementation of art and design projects in a single region. At the same time, special art and design bureaus and design departments were created at significant industrial enterprises. At the end of the 1970s, every sphere of industry had an organization responsible for the aesthetic qualities of the products.
The design system covered the whole country and it had no analogues in the West. It could not work perfectly well due to the planned economy and the absence of market relations, but its importance in the development of industrial production, the formation of the theory and methodology of design was enormous. After the Perestoyka the system was destroyed: the research institutes and the design offices were closed, many archives were lost.

The exhibition presents the unique items that tell about the state design organization in the USSR during 1962 - 1989 for the first time. The project is a result of the documentary research and collaboration with Soviet designers. It is impossible to cover all organizations existing in the fields of design, decorative arts and technical aesthetics. The exhibition focuses on the main institutes of Soviet design. Moscow Design Museum will continue the research and will be happy with any cooperation.
The exhibition features items from the collection of the Moscow Design Museum, the All-Russian Decorative Art Museum, the International Information Agency "Russia Today", the International Exhibition Center "Fashion Museum", the Moscow Union of Artists, the Museum of Industrial Culture, the charity fund "Zapovednik iskusstv", the Union of Artists of Russia, the National Museum of Toys, the Fashion Center of Russia, private collectors, families of artists and designers. 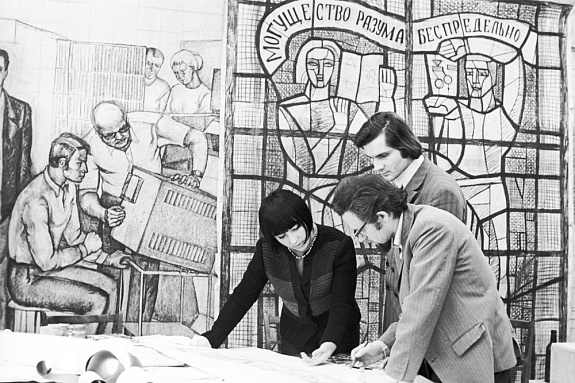