Designed in the USSR: 1950-1989 draws back the Iron Curtain to reveal a fascinating, charming and rarely seen world of Soviet design. Spanning almost four decades, this is the first book of its kind to celebrate the largely unexpected creativity, innovation and diversity of Soviet design.

This compelling volume features more than 350 images of products and graphics from the unique collection of the Moscow Design Museum – an institution dedicated to the preservation of Russia’s design heritage. From children’s toys, homewares and fashion to posters, electronics and space-race ephemera, each object reveals something of life under Communist rule. A comprehensive introductory essay by Alexandra Sankova, Director of the Moscow Design Museum, gives exclusive insight into the socio-political context of design in the USSR as well as how the industry was in uenced by the West.

Organised visually, this quirky tome is broken down into three chapters: ‘Citizen’, ‘State’ and ‘World’. ‘Citizen’ celebrates the everyday, domestic and consumer products that relate to an individual’s wants or needs: for instance Captain’s pipe tobacco packaging, Red Moscow perfume, the iconic children’s roly-poly dolls and a mobile immersion heater. Taking a step back, ‘State’ focuses on items that shed light on the state-controlled system of design, including movie posters, portable cassette players and children’s modular construction kits. Looking globally, Designed in the USSR concludes with ‘World’, which takes the Soviet Union out of the Eastern Bloc and onto the international stage through objects such as the 1980 Moscow Olympic Games mascot and the Saturnas vacuum cleaner – a remarkable example of space-age design, inspired by the Sputnik satellite.

Through three different lenses – Citizen, State and World – readers are taken on a micro-to-macro tour of the practical, kitsch, playful, politicised and often avant-garde designs, compiled to create a unique and compelling view of everyday life in the USSR. With a vibrant and eye-catching graphic cover, that echoes the striking visuals within, Designed in the USSR is a unique title that will appeal to designers and those eager for a more personal glimpse behind the Iron Curtain. 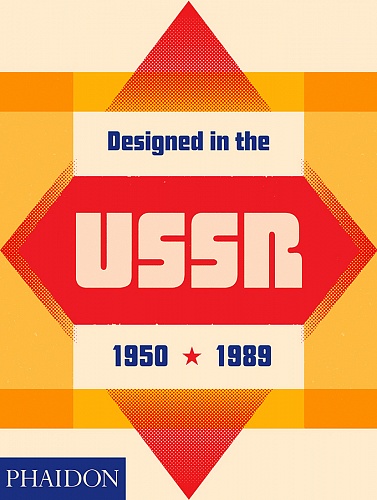