The exhibition includes some iconic pieces of the Soviet lifestyle, examples of graphic and industrial design, technical drawings and prototypes made by Soviet designers. The exhibits come from the Moscow Design Museum and private collections.

The exhibition is divided into sections, each representing a certain aspect of a Soviet citizen’s life and material culture: childhood and leisure, sports and public events, visual communication and packaging design, furniture and household products, precision engineering and industrial production, as well as unique VNIITE projects.


WHY DO WE KNOW SO LITTLE ABOUT DESIGN FROM THE SOVIET UNION?

Problem of terminology
The term ‘design’ was not officially in use in the Soviet Union until 1980’s. ‘Artists-constructors’ and ‘artists who specialize in industrial graphics’ (Soviet definitions for designers) worked in the areas defined in Europe and the USA as ‘industrial design’ and ‘graphic design’. Soviet designers could not have their own commercial studios and their names were known only within narrow professional circles.
Problem of copying and Copyright
Following World War II the Soviet industry experienced acute problems related to technological limitations. This was especially evident in consumer goods production. In some cases this problem was solved by the direct copying or modification of western counterparts, such as household appliances and transport vehicles produced on the other side of the Iron Curtain.
The Soviet state system of design was formed during the 1960’s and by the 1970’s most of the copies were replaced by original designs. At this time projects by Soviet designers started to receive recognition at international fairs. A major change occurred in 1973, when the USSR joined the Universal Copyright Convention.
Problem of mass production
In the 1970-1980’s, within the framework of a planned economy and bureaucratization of government, it was difficult for Soviet designers to put their projects into mass production. Less than one third of all developed projects were realized.


WHAT ARE THE DISTINGUISHING CHARACTERISTICS OF SOVIET DESIGN?

Precision and heavy industry engineering
The main achievements of Soviet designers in the 1950-1970’s were in the areas of space technologies, precision instruments, military machinery and heavy industry engineering. Soviet government made the development of these areas a priority in order to compete with the capitalist West during the Cold War.
Consumer goods were a posteriority. Many of them were manufactured at factories specializing in military and heavy industry production. This caused the products to have high functional and technological characteristics but often negatively impacted their appearance.
Ideologically responsible
The uniqueness of the Soviet design model stemmed from the opposition of its two main features. On the one hand, there were the human-oriented concepts of design, practiced by VNIITE and other art and design organizations. On the other hand, there was the technologically inert system of industrial production that had no economic stimuli for development within a planned economy.
According to socialist ideology the purpose of design was to serve society. The function-oriented and systematic approach to design, complemented by VNIITE designers’ advances in the area of ergonomics, led them to create products that could effectively satisfy the consumers’ basic needs.


WHAT CAN WE LEARN FROM SOVIET DESIGN?

Sustainability/ DIY culture/ Systematical approach
Soviet designers aspired to create timeless, high quality products. The government’s assortment policy and the principles of modular design allowed for the creation of universal models that could be adapted to serve different social and cultural circumstances. Such a clever and sustainable approach became a recognizable feature of Soviet design.
Some standardized goods that were available to Soviet consumers did not satisfy their individual needs and were often viewed as prefabs for creative follow-on revisions. Some goods were also sold as do-it-yourself kits, enabling Soviet citizens to create innovative, unique DIY items.


DESIGN IN THE USSR

1950–1960
The government’s policy of rapid industrial development was part of the economic reconstruction program in the Soviet Union after WWII. At that time, the profession of artist-constructor (designer) is created and introduced into the industrial production process. Designers were tasked with finding ways to quickly and cost-effectively manufacture goods on a mass scale. They had to keep in mind the existing capabilities and limitations of the national factories rather than the end-consumer’s needs.
During the Khrushchev Thaw period (1953-1964) decorative elements of Stalin’s Empire style in design and architecture were replaced by modernist elements in accordance with international trends.

1960–1970
Design became part of state policy. In 1962 the All-Union Scientific Research Institute for Technical Aesthetics (VNIITE) was founded and headed by the talented designer Yuri Soloviev. From 1962 to 1978 ten branches of the Institute opened across the Soviet Union.
VNIITE worked on industrial, environmental and graphic design projects. It carried out research projects, organized exhibitions and published the Technical Aesthetics magazine that highlighted questions of design theory and practice in the USSR and abroad. Starting from 1967 the authorities awarded certain consumer goods with the State Quality Mark in an attempt to increase the quality of industrial production. Overall output of consumer goods grows and they become accessible to the general public.

1970–1980
The Soviet Union began exporting goods to countries of the socialist block and Western Europe. Such Soviet brands as Zenit cameras, Slava, Polyot and Raketa watches, ZIL refrigerators and Moskvitch and Lada cars receive international acclaim.
In 1975 Moscow hosts the ICSID Congress. Yuri Soloviev was a president of ICSID from 1977 to 1980. The Centre for Technical Aesthetics opens in Moscow in 1976. Its purpose was to introduce the general public to achievements of Soviet design. However, many innovative projects still didn’t reach the production lines.

1980–1990
Soviet designers moved from creating single objects to developing a more complex, systemic approach as VNIITE introduced the method of 'Design Programs'.
The integrated system of visual communications and urban design solutions developed for the Moscow 1980 Summer Olympics was an excellent example of a well-coordinated collective design project.

In 1987 the first Union of Designers was set up in the USSR, designers were allowed to open private studios.

In 1991 the Soviet Union ceased to exist. The production crisis that started after the country’s dissolution slowed down the development of national design. Many important documents and projects developed by Soviet designers were lost.

Today many Russian and international designers look back at the soviet design heritage, study and re-evaluate it. 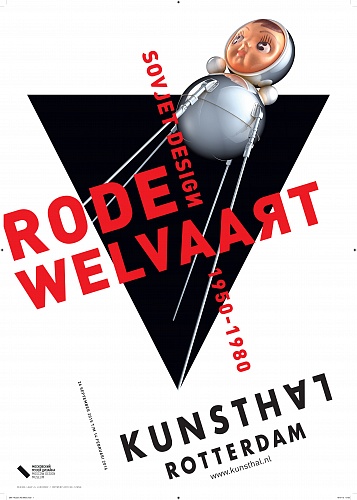